A gentle start to the first real day of MIFF due to my hungover state on Friday - I really shouldn't have had that glass of absinthe at the after-after-party, damn it.

I watched two films on Friday night, the first a restrained Polish/German co-production about teenage prostitutes, the second an unrestrained western set in small Australian town. 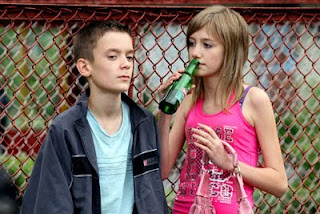 Set in the early 1990s on the border between Poland and Germany, this surprisingly subtle but sometimes